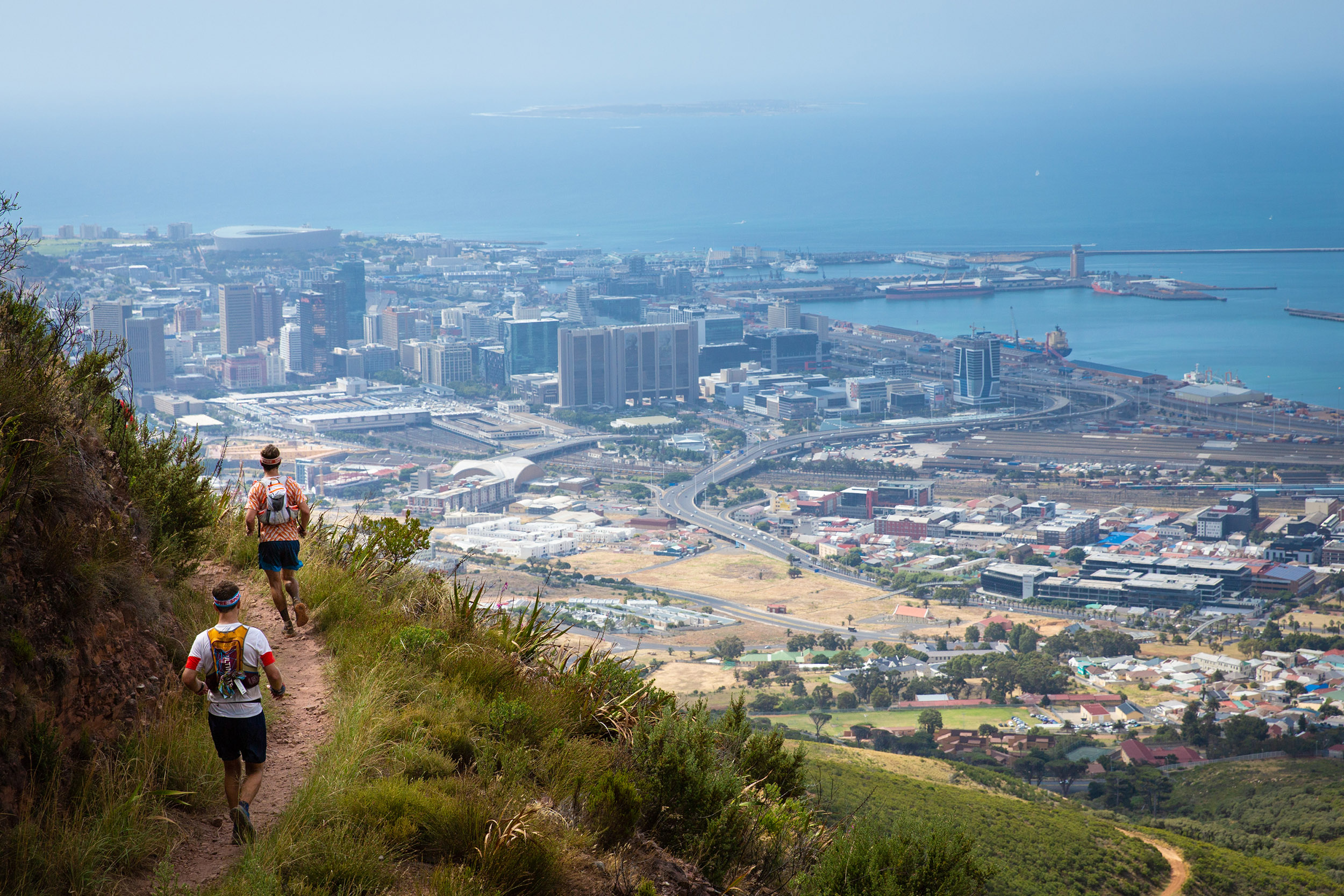 Posted at 11:57h in Trail by Adnaan Mohamed 0 Comments
0 Likes

The world’s top ultra-trail runners, as well as the best local talent, will line up for the eighth edition of South Africa’s premier ultra-trail running event, the Ultra-Trail Cape Town (UTCT).

The UTCT 100km race, run through breathtaking scenery over Table Mountain and parts of the Peninsula, will take place on Saturday 27 November.

Stuart McConnachie, Race Director, says: “We are overjoyed at the number of international athletes who are making the trip to SA this year, and look forward to seeing them challenge our very strong local runners, who are eager to share the trails with the world’s best.”

A significant change this year will be the cut-off time. SANParks has granted runners 24 hours to complete the 100kms, rather than the previous 17 hour time limit.

“We are grateful for the extra time for runners to be out on the mountain and for our partnership with SANParks that makes this event possible. The 24 hour cut-off has made UTCT accessible to a wider group of runners at the back of the field,” says McConnachie.

Frans Van Rooyen, Park Manager at Table Mountain National Park, says: “SANParks is excited to partner with UTCT for this event and is certain this will strengthen our relationship. SANParks  is confident of the race’s success and wishes everyone a wonderful time, and urges everyone to stay safe.”

Luthando Tyhalibongo, spokesperson for the City of Cape Town, host and partner to UTCT, says: “It is really delightful to support an event that encourages a healthy lifestyle, contributes to nature conservation while also showcasing this city’s natural beauty to the international stage. Ultra-Trail Cape Town is one of the youngest events on our annual calendar but it has shown it has massive potential for growth by increasing its participation field sevenfold since inception. The City is looking forward to hosting the athletes, the crews and local trail running community for yet another adventurous edition of UTCT.”

The organisers will be hosting some ultra-distance legends to light the flares at 4am at the race start, amongst them Bruce Fordyce. Fordyce is best known for winning Comrades nine times and for holding the 50 mile world record for 36 years. In 2019 this record was broken by Jim Walmsley from the United States, who arrived in Cape Town last week and who will be the favourite to win UTCT. This will be the first time the two athletes meet.

Walmsley is one of a handful of the world’s top ultra runners, excelling on both road and trail, and he has long looked forward to running in South Africa: “I am so excited to finally find a time to make it out to race in a country with such a rich running history, especially in the ultra-marathon world. I’m looking forward to getting after the hard trails!”

Walmsley has placed first at the 100 mile Western States Endurance Run for the past three years and won the 100km HOKA One One Project Carbon X road race earlier this year in a time of 6:09:26. His fellow Arizona athlete Cody Reed, who is the 2019 UTCT champion, has joined Walmsley in South Africa but will be taking on the 65km race this year.

Other prominent international athletes on the start line will be French-Canadian Mathieu Blanchard and Italian Andreas Reiterer.

Blanchard recently won the Cappadocia Ultra-trail, and amongst other impressive results, he secured a 3rd place finish at Ultra-trail Mont Blanc (UTMB).

This is Reiterer’s third time at UTCT, having won the 35km in 2019 in a record time. In 2018 he was leading the 100km until 80km into the race, when he withdrew. He has had multiple wins in races across Europe this season, including a 4th place at UTMB CCC.  He says: “After a long, and for me very good season, I am happy to finish my year at UTCT. My training is going very well and I am still fully motivated.”

Other names to watch out for are Sebastien Spehler and Matthieu Clement  from France, and Pascal Egli from Switzerland.

The South African men’s line-up boasts a solid mix of experience and young talent, with Prodigal Khumalo and Bong’musa Mthembu representing the former.

Khumalo is a two times gold medallist at Comrades and winner of UTCT in 2016 and 2017, where he holds the record time of 9:51. The record stands despite the long list of international runners that have taken part at UTCT since then. Khumalo won the 32km Ultra-trail Drakensberg (UTD) earlier this year and came second at the Karkloof 50 miler in September.

Three times Comrades winner and holder of the Africa Record for 100km (road), Mthembu has unfinished business with UTCT after a DNF in 2017.

He says: “This time I am well prepared and I have a better  idea and a little experience of the route. My training went very well I believe, and I really want to take myself out of my comfort zone and push myself. With  the top contenders we have this year, I am looking forward to it.”

There are a host of Cape Town locals to watch. Daniël Claasen and Kane Reilly spent the 2021 European summer racing mountain trails, both taking part at UTMB CCC. Coupled with successful seasons on the local trails, where Claasen placed second at the UTD 65km and Reilly was second at the Cape Town Trail Marathon last month, the two should feature strongly on race day.

Matthew Healy, Josh Chigome and Robbie Rorich are the other Capetonians ready to make their mark. Healy won the Addo Elephant Trail Run 100 miler earlier this year and then gained attention with his second fastest known time (FKT) on the 13 Peaks Challenge, the tough 100km route that tags 13 peaks on Table Mountain and the Peninsula.

Finally, young Nkosi Mhlakwana, coached by Prodigal Khumalo is definitely turning heads at races, winning the 62km UTD and coming 11th at his first Comrades in 2019.

Courtney Dauwalter (USA) needs no introduction in trail running circles, and having smashed the UTMB women’s race this year, coming in 7th overall, she will be the one to beat amongst the women. After enjoying her energetic presence as a supporter in 2019, UTCT is excited to have her return this year to run.

She says: “I came home after my last trip and couldn’t stop raving about how beautiful Cape Town is, how awesome the community at UTCT is, and how much fun I had.”

Maryline Nakache from France is the other international runner we expect to feature at the front end of the women’s race. She was sixth at UTMB and has been on the podium at the Tenerife Bluetrail Ultra and the Montreux Trail festival this year.

She says: “UTCT is a race that I have dreamed of for a long time and I am very lucky to be able to come this year. My preparation is going well and I am coming above all, to have fun. Many elites will be present, we will have to run fast!”

Ashworth, Comrades winner in 2018, has embraced the trails in the past 18 months, but still feels new to the sport. She came seventh at UTD 110km and won the Karkloof 50 Miler this year but is modest about her chances at UTCT: “I am super stoked to be taking part in the event and will be more than a little starstruck by the likes of Courtney, Jim, Mathieu and Maryline.

“It’s incredibly cool to have athletes of such a high calibre coming to the race, I really feel like UTCT has struck gold this year!  It’s seriously intimidating lining up with these athletes and our own trail superstars – Prodigal, Solly, Kerry-Ann, Amri, Jo – and all I can do is aim to have fun and learn from the experience.”

Cape Town local Kerry-Ann Marshall is the 2015 UTCT champion and was runner up in 2018 (with a 9th overall finish). She is strong and fast and has a Comrades gold medal to her name.

She says: “It is very inspiring to know we will be standing on the startline with one of the world’s best ultra-distance runners, Courtney Dauwalter. I expect the pace to be relatively quick from the get go. I will be running my own race, mostly trying to get to the finish in one piece.”

Jo Keppler, a relatively new face on the trails, came first at the Karkloof 100 miler and at UTD 100 miler she came second to Amri Williamson, who we will also see on the UTCT startline. Williamson came 9th at UTCT in 2019, so will be one of the athletes who is familiar with the route. Annelise Scholtz rounds off this impressive group of women. She is winner of the Karkloof 100 miler in 2019 (coming 5th overall) and was second at the K-Way Skyrun in 2020.

Says McConnachie: “With this calibre of runners lined up on Saturday, we are in for an exciting race.”